It is Never Too Late

Starting a blog...something I've always wanted to do, perhaps 10 years ago. In fact, I remember those days when i spoke at various seminars of how internet would change our life and how contents over the internet will be flooded by self or user generated contents, it was merely a myth then. It was plainly beyond imagination then.

Now, after 10 years, user generated contents became not just merely past time reading, but have became "referred trusted contents" by many. People tend to believe what they read what others says on the internet than people they know for ages. It became reference point for many:-

(i)   to decided on holiday destinations and itinerary
(ii)  to form and opinion and views on all matters including, life, business, politics and religion
(ii)  to learn new things - recipes, how to... etc.
(iv) and the list goes on......

Is it too late then for me to start one myself?? To pen down the first time is always the hardest part. But then again, after just looking around things that happened over the past 10 years, everything seems to be moving very fast right in front of our own very eyes....what was not there then, is here now..what was a myth, a reality..what we thought can never be replaced being replaced..what were merely academics now being practical.

Who would have thought  the used to be number 1 search engine Yahoo being replaced by Google?? My kids don't even know the existence of Yahoo. And as I'm writing this blog, I received an email from my colleague, Tengku Farith about this new kids on the block that could change the world.... Check this out!! Startup Changing the World

See how what I mean by how fast??? What else have changed over the past 10 years? 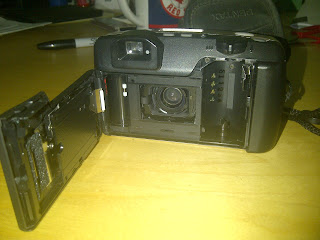 This camera was found by my 11 year old son somewhere in my study room. He asked me whether he can have it or not. I told him that he won't be able to use it because the camera needs FILM and no photo shops near our place sell FILM anymore. FILM???? This is alien to my son...

We were at this antique shop in Malacca Jonker Street and my 11 year old son saw this weird looking stuff and asked me this.."What is this Daddy??". And I looked at him and asked him "Don't you know what that is? What does it look like??" And he looked at me with clueless face and said " I don't know. Never seen it before..??". It took me a while to make sense out of what I just heard and calmly told him "It's a phone". And he asked me again."Do you know to use it?"...and there we go..I got to do some explanations.

The camera and phone are just few of many others. 10 years too is just too short.

What about community? Near where i stay there is this area which many today call the "Korean Town" and the "Arab Town". The Koreans have their own provision shops, supermarket, private schools and more than 3 churches within the same area. And the Arabs are not much less either. Ten years from now? I won't be surprise if they have political rep too..:-)

Anyway, my point is, it can never be too late. So here I go, my first blog.....and it will not be the last I hope. It would be my personal point of view on everything and anything. Do keep on visiting.....Sorait!!!.
Posted by Aimi Aizal at 10:37