Imperialism Hangover After 55 Years of Independence??

"Until that day, our minds are still being colonized and yet to be a truly "independent""....that was my last sentence in my article titled "Malaysia's Look East Policy-30 Years Already?".

Over the past 1 month, I've been overdosed with stories, input, information, songs and you name it...everything about how lucky we are being and independent country and how those in the past had sacrificed their  heart, soul and even life fighting for this independent state.

We have just celebrated our 55th year of independence and Malaysia Day. I guess it is timely for me to write something about it as well. I'm not a historian neither am I political science practitioner, but I personally feel that, despite we are physically independent, our minds are still been colonized. Read on to appreciate what i mean...

So much we have achieved over the past 55 years, but 450 years of history of being occupied is not something that can be easily forgotten. Although the generations X and Y don't really have direct contact with the past, somehow the inferiority of being colonized by their ancestors and grandparents do still have some impact on their behaviour, attitude and values today. 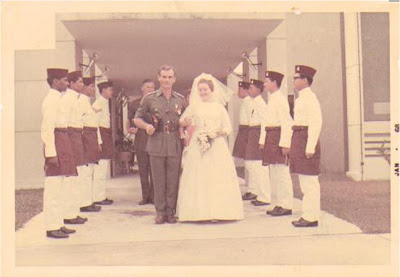 Despite the British had left in 1957, the hangover effect of their presence were still there many years after that. The photo above was taken in 1967, on a wedding of Malayan British captain in Terendak Camp Malacca. That was 10 years after our independence.

I still remember when I was a kid and my younger years where any "Mat Salleh" was considered much more superior, more knowledgeable, more intelligent and smart people. It was not until sometime in 1982 when my dad came back from his 3 months course in London, which was also his first experience out of the country then, and shared with us his experience and what he saw in London......"Mat Salleh pakai coat kerja sapu sampah tepi jalan aje"..."tak semua Mat Salleh dalam class Abah yang pandai pun..". Although we've seen it on TV then, but the way my dad explained with his body and facial expression, I was convinced that there were "dumb" Mat Salleh too...

How long did this Imperialism Hangover last? Personally, i think it is still there even now. It may not be as bad as it was then. More Malaysians traveled and lived abroad nowadays, and they too have learned what my dad had learned about 30 years ago.

I believe there are some would agree and some would not agree with me that despite we are no longer physically been colonized, the fact remains that our minds are still being colonized...which means we still in the state of Imperialism Hangover...

In my previous article I mentioned "I truly believe Malaysia has huge potential to be the next super power". I received some personal messages commenting this statement is far fetch and close to impossible. Of course there were also messages that supported this statement. To me, it is merely a test whether or not we are still in the hangover state of minds or colonized minds or not. Until we all  or most of us believe we can, we have yet to attain a true independent state or an independent nation.

Vision 2020 and Colonization of the Minds

This brought me to check out Malaysia's divine vision of Vision 2020. Going through the challenges outlined by Tun Mahathir's in 1991, I find it interesting that among the challenges do relate to the elimination of this Imperialism Hangover....although not explicitly mentioned.

He laid out nine (9) challenges, but here I just wanna discuss four (4) of those challenges only, namely:-

The keywords here are "confidence in itself" and "justifiably proud of what it is". I totally agree with this. In order to achieve certain destination, one must have full confidence in driving or be part of it...perhaps my philosophy speaks by itself.

Do a quick survey on whether anyone in Malaysia believe we can and will be next super power...I bet we will get more excuses of why it is still far fetch than positively believe coming up with plans to achieve it. Among the excuses I got:-

(ii)   The westerners are just too advanced to catch up - my take: read our history again. About 1000 years ago, the westerners were in the dark ages. Most of them can't even read, barbaric like the Vikings and generally didn't even take daily bath. It was close to impossible and unimaginable for the western world to catch up the super modern and technologically advanced people of Andalusia during the era of Caliph of Cordoba.The Andalusia then was the centre of knowledge, science and arts. People came from around the world to Andalusia to learn algebra, astronomy, economics, medical, science and arts, which predominantly originated from islamic scholars then such as, Al-Khawarizmi,  Ibnu Sina, Ibnu Khaldun etc.....

Many more excuses I received but the above should be sufficient to prove my point.

Establish a Scientific and Progressive Society

The objective is to make Malaysia the contributor of science and technology rather than consumer of technology through promotion of innovation.

The Malaysian Government has done a lot to promote the growth of technology and promote innovation. It came out with national initiatives and at same time make available grants and fundings to facilitate the growth. Just to name a few:-

All these initiatives combined, we would probably be looking at a solid 20 years of struggle to establish a scientific and progressive society...If we include specific funds injected into Government  linked organisations or companies like MIMOS, SIRIM, etc, we probably be looking at billions of ringgit have been spent over the last decade.

Question is, how many of these, perhaps thousands of initiatives have been successfully commercialized hence contribute to the innovation of technology?? How many local heros have we produced since then??

A simple test perhaps can be done by merely asking any Ministry's Secretary General, CEO's of top Government Link Companies/Corporations ( GLC ) such as Khazanah Nasional Berhad, Petronas, Tenaga Nasional, Permodalan Nasional Berhad, Tabung Haji, Malaysia Airlines etc. to name 5 local technology products they use in their organization....OK...perhaps ask 2 local technology products instead. If they can't still do that, perhaps ask if they even know any 5 that even exists instead...

Do the same to top Government officers and CEOs of GLCs in the United States, Japan, Korea, Taiwan or perhaps even our neighboring country Singapore...You'll be surprise with the answers. Believe me, this is not guessing job..

What about government or privately funded multi billion mega projects or concessions undertook by private, public sectors or GLCs such as the MRT by Mass Rapid Transit Sdn. Bhd., Bestari.net by YTL, KLIA2 by Malaysia Airports etc? How much local innovative contents or products and services have been used in those development?

I do find some of these amazing for example, Bestari.net uses FROGTRADE as its platform, where YTL bought more than 57% shareholding in this United Kingdom based company for more than RM30 mill. A company that could only sell to 600 schools in its own country in UK and here we bought them for more than RM30 mill and implement it in 10,000 schools in Malaysia?? What about Malaysia owned locally developed learning platform that comes with content such as Cikgu2u.com which has been struggling and manage to pilot more than 100 schools in Malaysia through own initiatives? What about the multi million ringgit MIMOS Interactive Learning and Management??

The above are just tip of the iceberg. The damage of mismatch of aspiration against action is much bigger than this. I personally know many local entrepreneurs who were once so passionate with Malaysia's Vision  of becoming technology provider through innovation but they end up became traders of foreign technology themselves.

I believe our NATIONAL PROCUREMENT POLICY need to be seriously reviewed to eliminate the gap of mismatch of aspiration and action. There are already such policy in place, so I was told, on a "best effort basis"....whatever that means.

The government do realize this issue (I believe so), thus in the recent draft National Science, Technology and Innovation Policy (NSTIP), this issue was raised though no clear affirmative action has been introduced as yet.


As for the private parties, it is true that the government can't force them but the government could entice them by giving incentives for having Malaysia's local innovations in their procurement activities.

I realize it is not easy to get ourselves out of this Imperialism Hangover. But we have to be bold, willing to make and allow mistakes and learn. We cannot continue to hold this old saying, "IF IT AIN'T BROKE, DON'T FIX IT"

Wow!!! Seems I got a bit carried away this time writing this blog. Two more challenges of Vision 2020 have yet to be discussed. I tell what....I'll stop here for now but promise to touch those challenges in my upcoming blog titled "1Malaysia, What it Really Needs - My Thoughts". Check out my On The Way.

I believe, for Vision 2020 to be realized, we need to get out of the cocoon of colonized minds, the minds in the state of Imperialism Hangover. And back to my earlier points, it is about time for us to look at those who are currently fighting today for Freedom from Colonized Minds.......Sorait.